Skip to content
This site has limited support for your browser. We recommend switching to Edge, Chrome, Safari, or Firefox.

FREE Shipping on Domestic USA Orders of $100+ SHOP ALL Cities See the Arts as a Beautiful Economic Tool

Smaller cities are designating rundown areas as cultural districts and inviting artists and developers to help lead the way in revitalizing them! While certain American cities, from New York to Santa Fe, have long enjoyed the cultural and economic benefits of thriving local arts communities, many smaller cities in recent years have tried an arts-based urban-renewal strategy by designating rundown neighborhoods as “cultural and arts districts” and inviting artists and developers to help lead the way in their revitalization. Some offer such incentives as tax abatements and credits, though in most cases, the incentives are something other than tax breaks. In Massachusetts, for instance, state officials offer marketing help, including grants of as much as $5,000.

“Creative, high-value people like to be around folks like themselves, forming what is called a ‘creative cluster,’ ” says Travis James, vice president of the economic-development consulting firm TXP Inc., based in Austin, Texas. “From these creative clusters you might get the next Steve Jobs,” Mr. James says. “Arts and culture districts are the vehicle to bring these people together.”

It’s unclear exactly how many official arts districts exist in the U.S. The National Association of State Arts Agencies tallied more than 250 in 13 states in 2015, while the advocacy group Americans for the Arts in Washington, D.C., puts the number at more than 300. Louisiana has 83 such districts (22 in New Orleans alone), Massachusetts and Texas 35 each, Iowa 34 and Maryland 24, according to Robert Lynch, the group’s president. Others are in California, New York, New Mexico and Rhode Island

A key ingredient of Rhode Island’s plan was to target former factory areas where buildings were empty and jobs had disappeared. Pawtucket, a blue-collar mill town in which a large percentage of the mills had closed, became one of the first Rhode Island cities to try creating a special arts district. In the early 1990s, the city began permitting artists to move into some buildings as live-work space, and a few developers began renovating loft spaces for residential use. This speeded up in 1998, when the state Legislature adopted a law exempting sales of original and limited-edition artworks from the state sales tax, and exempting the artists who lived and worked in official cultural districts from paying state income tax for the artworks they sold there.

“The arts district was an effective marketing tool to pull artists and developers to our city,” says Herb Weiss, Pawtucket’s economic and cultural affairs officer. So far, eight of 23 formerly unoccupied mills have been fully renovated and rented to residential and commercial tenants. Art galleries, performing-arts troupes, restaurants, cafes and shops have made the once-dreary industrial neighborhood hip and inviting as well.

Since 2013, artists living anywhere in Rhode Island are exempt from state income tax on sales of their work in the state. Although no hard figures are available, “anecdotally, I have a sense that more artists have moved to Rhode Island,” says Randall Rosenbaum, executive director of the Rhode Island State Council on the Arts. 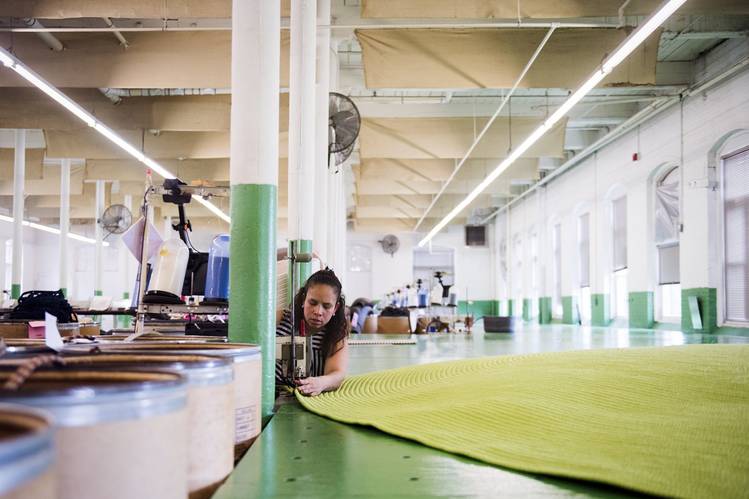 The Colonial Mills fabric factory in the converted Lorraine Mills in Pawtucket. Eight of the city’s 23 formerly unoccupied mills have been fully renovated and rented to residential and commercial tenants. PHOTO: ADAM GLANZMAN FOR THE WALL STREET JOURNAL

Law and the arts

One commercial tenant that moved into one of Pawtucket’s former mills is the 150-employee law firm Shechtman Halperin Savage, formerly located in nearby Providence. Jonathan N. Savage, both a partner in the law firm and owner of its current building, says rents in the district were one-third less than the firm was paying in Providence. The large spaces available also enabled the firm to easily reconfigure its offices as it expanded, he says. Mr. Savage, a developer of two buildings in the district, estimates that 80% his tenants are “arts-related, painters, sculptors, graphic designers.”

“The arts elements when we relocated were not a big factor for us,” says Mr. Savage. “It was more about the greater space and less rent.” But now that the firm has moved, he says, “the artist community gives off a vibe, a positive energy.

Jennifer Bogan, leasing manager for a company that has renovated two buildings in Pawtucket and is readying a third for occupancy later this year, says some artists have moved into the former mills for studio and living space. But she notes that “at least 30%” of the tenants commute to Boston (45 minutes away by car) and 50% commute to Providence (10 minutes away).

Incentivizing many of the developers is a citywide tax-stabilization program that phases in increases in property taxes over five years for new construction or rehabilitation, says Michael Cassidy, a planning consultant to the city of Pawtucket. Still, city officials and developers credit the artists and art venues as the catalyst for a significant amount of economic redevelopment.

Maryland, meanwhile, has a mixed record of success with its 24 arts and entertainment districts. Artists who live in the districts are exempt from state income tax and sales tax on artworks sold within the districts. Pamela Dunne, senior program director at the Maryland State Arts Council, notes that a 2014 survey found a $40,000 loss in sales-tax revenue resulting from the sales-tax exemptions. “It hasn’t been generating a lot of sales,” she says.

But there have been 6,000 mostly service-industry jobs created in these districts—a mix of seasonal, part-time and full-time positions—producing $198 million in taxable wages since the program was inaugurated in 2002, Ms. Dunne says.

No census of artists living in Maryland’s arts and entertainment districts has been taken, and the state hasn't examined whether the districts perform better economically than other areas. With three districts in Baltimore and 21 elsewhere in this small state, it’s possible they compete with one another and dilute the effect. Still, Ms. Dunne says, arts and entertainment district designations work “when the local community involvement buys in. People in these communities are interested in revitalization and want to use the arts as a pivotal tool.”

A Robert Mark Golf employee works on a custom leather golf-club head cover in a converted mill in Pawtucket.PHOTO: ADAM GLANZMAN FOR THE WALL STREET JOURNAL

Douglas S. Noonan, a professor in the School of Public and Environmental Affairs at Indiana University, has studied cultural districts and questions their effectiveness as urban policy. Such areas “usually don’t do much in terms of alleviating poverty or bringing in new jobs,” he says. “Their largest impact probably has been in terms of increasing property values.” That, in turn, leads to what some refer to as the SoHo effect: People of means like the big, open loft spaces that developers renovate—supported in Maryland by tax credits—which leads the artist population to be priced out.

The reality, says Dr. Noonan, is that “cities are competing for people who are drawn to cultural areas, who tend to be rich or upper middle class. It raises the question of why is government supporting this group of people.”

Mr. Grant is a writer in Amherst, Mass. He can be reached at reports@wsj.com.

No more products available for purchase

Your Cart is Empty